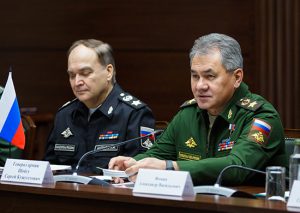 Anatoly Antonov, Russia’s new ambassador to the United States, said today that Russian and American military and security officials should resume regular contacts that were suspended after the Russian invasion of the Crimean peninsula.

“The time has come to resume joint meetings of Russia’s and the United States’ foreign and defence ministers in a ‘two plus two’ format,” Antonov said in an interview published on the Kommersant business daily’s web site, reported Reuters. He also called for a ‘working relationship’ between the U.S. and Russian security councils.

Antonov, the former deputy foreign minister, is currently sanction by the E.U. for his role in the Ukraine crisis.

The United States and Russia face similar threats from the Islamic jihadi threat. Cyber security is an area President Trump has mentioned as a possible area of focus as well between the two countries.