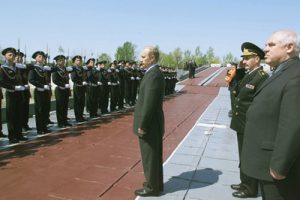 Russian President Vladimir Putin has accused foreign intelligence agencies of fomenting terror on Russian borders in order to weaken the Kremlin’s hold on power. Extremists and terrorists are receiving support from Western entities said the Russian leader. Putin also recently accused the West of pushing regime change in the Russian Federation. It seems Moscow is changing the narrative somewhat to focus domestic attention on the supposed threat from the West.

“In general, the growing activity of foreign special services against us and our allies is obvious,” Putin said in a televised speech in Moscow on Wednesday, without specifying which nations he was referring to. “There are operations to influence the domestic political and social processes in our country,” reported Bloomberg.

“The Kremlin is convinced the United States is laying the groundwork for regime change in Russia, a conviction further reinforced by the events in Ukraine,” wrote Associated Press on a report issued by the Pentagon on the Russian leadership.

“Nevertheless, these actions also belie a deeply entrenched sense of insecurity regarding a United States that Moscow believes is intent on undermining Russia at home and abroad,” said the report when discussing U.S. activity in the Middle East over the last several decades.