Letters of the forgotten homeland preserved on ancient bricks…

In a recent interview for Shqiptarja.com, the Belarusian scholar Aleksander Novik spoke about what he called one of the greatest discoveries of the Albanian cultural heritage in Russia – 300 bricks bearing old Albanian alphabet letters. One more time, the presence of old Albanian settlements, not only in Ukraine, but in Russia as well, is confirmed by the latest discoveries made by Novik and other Russian archaeologists.

Novik is a professor at Saint Petersburg University and also the Director of the European Studies’ Department at Kunstkamera Museum in the same city. He has always been interested in studying Balkan traditions and their preservation through the centuries. He has visited Albania several times and speaks Albanian fluently since his earlier years. His teacher, who taught him Albanian at the university, lived in Albania until the 1960s.

Novik has joined many expeditions in the region of old Albanian settlements and has remained surprised at how they have preserved their language and ethnic consciousness for more than five centuries, having no contact with their homeland. Novik himself has organised various expeditions with his students in the area of the Azov Sea, in which there are a number of villages founded by Albanians during the 18th century. Twenty years ago, in the same region, the Russian archaeologist, Midriz Injuk discovered some bricks with Albanian old writings inscribed on them. But the greatest expedition was organized in 2015, led by the Russian archaeologist Dmitry Zenyuk. It was an ethno-linguistic expedition from Saint Petersburg University that went to the Rostov region, precisely to the villages of Margaritovo and Albanski near the Azov Sea. The reason for the expedition was the discovery of a rare monument belonging to the ancient Albanian heritage mentioned above. 200 more bricks having inscriptions similar to the three alphabets used in Albania 500 years ago were discovered there. The three old Albanian alphabets are: Elbasani Alphabet with 53 letters; Vithkuqi Alphabet with 31 letters, and Veso Beu Alphabet with 22 letters. 100 more bricks with Albanian inscriptions have also been found in Ukraine, so 300 bricks altogether are held now by Russian museums. 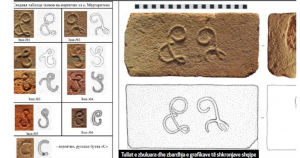 Knowing Albanian language very well, Novik believes it is the same alphabet used by the Albanians who settled in Ukraine after fleeing the Turkish invasion of the 15th century. Unfortunately, the history of the Albanian settlers in Russia is completely unknown for both Russian and Albanian scholars. But Novik is sure new facts may emerge through deeper studies. He is trying to discover an unknown page of the Albanian heritage, collaborating lately with the Albanian Science Academy, which after reformation is trying to pay due attention to such artefacts. For his great contribution in studying the Albanians of Ukraine and Russia, Novik was awarded the National Prize of the Albanian Science Academy for 2017. Novik believes there have been made a lot of high-level discoveries and analysis, regarding the Albanian heritage in former Soviet countries, that have surprised many foreign Albanologs. However, better cooperation with Albanian archaeologists and scholars is needed.

Today, there are no more Albanian descendants living near the Azov Sea, but the regional population keeps alive memories of the Albanian founders of these villages. Novik and other Russian archaeologists’ discoveries are very important for Albania, as there are no facts regarding the existence of an Albanian alphabet ten centuries ago. Most of the archaeological discoveries have been in the Latin or Greek alphabet. The 300 bricks with old Albanian inscriptions mark essential progress, regarding this heritage, that hopefully will be followed by new emerging facts, due to the hard work and commitment of Aleksander Novik and other Russian scholars.