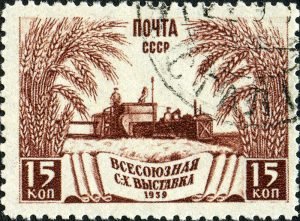 A massive harvest is underway in Russia for wheat and other grains. In fact, the possibly record production is so huge, current infrastructure cannot keep up and may slow exports, simply from lack of ability to get the grain to ships. Ports and railways are bursting with product; there is almost no storage left, leaving the country to secure storage overseas.

Since the fall of the Soviet Union, productivity gains and the use of advanced technologies has pulled the Russian farming industry out of the dark, communist times and put its vast natural resources to work much more efficiently. Western sanctions have also forced Russian industry to become more self-reliant, and not rely on imports, except from Asia.

With infrastructure at its limits, calls for more investment in this booming sector of the Russian economy are forthcoming. Currently, if staggered appropriately, there are enough rail lines and trucks, but just marginally.

“We’ll just barely pass through this season,” according to SovEcon’s Sizov, who said monthly exports may reach a record of as much as 5 million tons this season. “That will give an impetus for new investment in the infrastructure of the grain market,: reported Bloomberg.

Russian President Vladimir Putin has made it a top priority to diversify the Russian economy away from oil and gas. Although there has been limited success in this area, farming is a huge exception.

“If crop estimates continue to rise, that won’t lead to higher export forecasts,” Andrey Sizov Jr., managing director at SovEcon in Moscow, said by phone. “It simply wouldn’t be possible to ship out that much,” reports Bloomberg News.

Output this year could surpass Soviet records, after declining after the USSR fell. Russia is expected to once again be the world’s largest grain exporter this year with 44 million tons. Russia can once again be called a grain superpower.