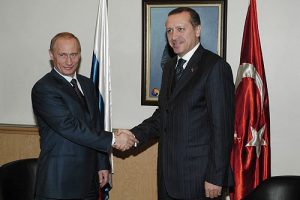 Russia and Turkey have agreed to lift all trade restrictions that were imposed after Turkey shot down a Russian fighter jet that had strayed into Turkish airspace from Syria. Russian President Vladimir Putin and Turkish President Recep Erdogan spoke at a news conference in Sochi after a meeting.

“You asked when we can speak about the lifting of the restrictions that emerged some time ago. We can speak of that today…We agreed on a comprehensive solution to all these problems linked to the restrictions,” declared the Russian leader.

“Now we can say with certainty that the recovery period in Russo-Turkish relations is over,”Putin added. “We are returning to a normal cooperation partnership,” reported AFP.

The two countries also through their backing behind creating safe zones in Syria. Both Erdogan and Putin threw their weight behind the safe zone proposals. However, the rebel delegation at the talks in Kazakhstan walked out of the discussions in protest to what they say are repeated violations of the previous ceasefire agreements reached.

The proposal presented to the rebels in Astana delineates four zones in Syria where front lines between the government and rebels would be frozen and fighting halted, according to a statement made by rebels. The four include areas in the provinces of Idlib and Homs, the eastern Ghouta suburbs outside Damascus, and an area in the south of the country, reported AP.

The Trump administration sent a senior State Department representative to the talks after Putin and Trump spoke on the phone this week.