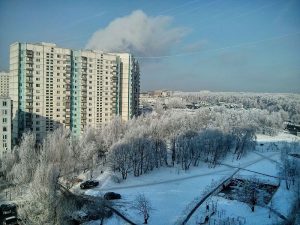 After the end of the Great Patriotic War, Soviet leader Nikita Krushchev decided to move citizens from the communal flats of the WWII period in to low-quality apartment blocks that were massed produced during the 1950s and beyond. These were to last only fifty years. Russians still live in them.

The Kremlin has decided to demolish the old structures and now move residents into modern, high-rise facilities. That will entail moving 1.6 million people in Moscow alone. However, there are concerns about the quality of life of these residents prior to the 2018 election.

The State Duma has already completed a first reading of the bill and the second one is scheduled. Thousands of dwellings have already been torn down with thousands more “khrushevkis” on the chopping block.

“There are positives, of course. We got a new apartment which is bigger then our last one,” one resident who identified himself as Lyubov and lives in a new block told Reuters Television.

“But there are negatives too. “There are problems with the apartment block, it stinks, something is rotting in the entrance hall. There is one cleaner for the whole house,” writes Reuters.

However, most residents have been ordered to move and they do as they were told, no matter the new conditions.

Will 2018 Bring A Solution To The Dispute Over Macedonia’s Name?