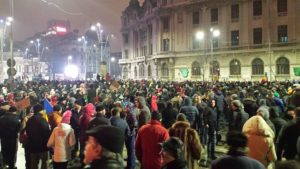 With a half-million protesters in the streets of Bucharest on the sixth day of public anger, the largest demonstrations since the end of communism, the left of center government of Romania vowed today to stay in power. However, there were signs of weakened support for the revision of the anti-corruption laws that sparked the civil unrest.

Prime Minister Sorin Grindeanu acknowledged that “the act had led to division,” and suggested he may fire the justice minister later this week. Protesters are angry at an emergency ordinance that would decriminalize abuse in office by officials if the amount involved was less than about $48,500, reports AP.

All of this needs to be seen in the context of a rather robust anti-corruption effort Romania has undertaken over the last several years which has landed scores of politicians in prison. The new law coincided with the prospect of 2,500 white collar criminals being released from jail.

Citizens of the former communist dictatorship do not seem to want to go back to the old corrupt ways of the past. If demonstrations persist of the size seen Sunday, it is hard to see a path for this government to remain legitimate and stay in power long-term.