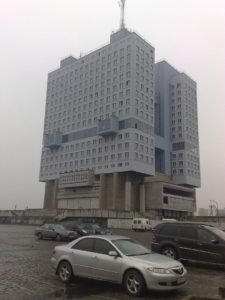 The Lithuanian government has halted construction of a data center due to the contractor’s link to the Russian FSB in Kaliningrad. Officials have been warned the proposed largest data center in the country would be wired to a Russian spying center.

The project developed by Arcus Novus, a local company, and AmberCore DC, its subsidiary, have appealed the decision.

Based on data from the Center of Registers, Denmark-registered Satgate Holding holds 51 percent of shares in Arcus Novus, which is the sole shareholder of AmberCore DC, the date center developer, and Valeriy Avetisyants, who is registered in Russia’s Kaliningrad region, owns the remaining 49 percent.

Based on his LinkedIn profile, Avetisyants is a founding partner of Satgate Holding and the founder and deputy director of Kaliningrad-registered logistic company STG. He has in the past worked at Gazinvest Grupp and Gazprom Komplektaciya, reports The Baltic Times.

Will Kadyrov Really Step Down?