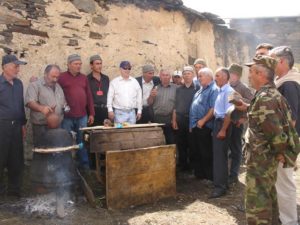 US Senators John McCain, Lindsey Graham, and Amy Klobuchar arrived in Tbilisi for a two-day visit.

“We will continue to do everything possible to support the independence, freedom and territorial integrity of Georgia. We will strongly urge our colleagues toward more meaningful and stronger sanctions against Russia because of their attack on the United States of America,” declared McCain to reporters in Georgia’s capital, Tbilisi.

The senators visited Khurvaleti, the border area near the disputed Georgian territory of South Ossetia, which was occupied by Russian forces during the war in 2008.

“Russian aggression destroyed lives of thousands of people. They deserve to rebuild their lives, the lives they have had before the actions of Russia. I’m firmly convinced that the new US administration of President, the Senate and the Congress won’t change the position on the support of Georgia,” said McCain while at Khurvaleti.

McCain thanked Georgian soldiers who are serving in Afghanistan with the Americans for their contribution to international peace. “They are defending the freedom of American people, as well as Georgian people. Vladimir Putin has illegally annexed part of this country, but one day Georgia will be free, whole (territorially) and independent. We are glad that we are here, together with the military,” Senator McCain stressed.

During the visit McCain met Prime Minister of Georgia, Giorgi Kvirikashvili. “We were, are and will be the most reliable partner of the United States in the region,” declared Kvirikashvili after the meeting.

“I believe that we should continue to improve relations between US and Georgia and we need to understand that if we do not stand together against Putin, it will be a chance for Putin to continue his aggression, so we have to stand united against him,”said McCain.

The Senator’s were conducted to convince partner countries that Washington will resist Russian aggression. The politicians visited Ukraine before going to Georgia. Latvia, Lithuania and Montenegro will be their next destinations. 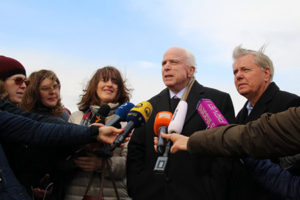 Ukraine Slashes Gas Use As Subsidies Phased Out

Kazakh Currency Loses 25% Of Its Value In Free Float