I love Albania – a country full of wilderness, history, and incredible sights that take your breath away. Mountainous regions where you feel as if you are the first human who has ever set foot there, and white sandy beaches that stretch as far as the eye can see. Wetlands, lagoons, canyons, lakes, pine forests, and rolling countryside, there is not much that this country doesn’t offer, which is one of the reasons why I have chosen to make it my home. To me, geographically at least, it is a paradise and one of the last unspoilt frontiers of the European continent.

But there is something festering here that makes me incredibly sad. I noticed it for the first time during my first few weeks of being here and that is the sheer amount of litter and rubbish that is discarded in nature. It lines the banks of the rivers, dangles from the branches of low-hanging trees, and gets devoured by the ocean with each wave that laps the polluted shores.

I organise community led clean-ups every six weeks, in various parts of Albania. I and a team of 20-30 volunteers give up our Sunday, pile in a minibus and head off to a beach or expanse of the countryside that has been identified as having a problem with rubbish. We spend a few hours collecting waste and then dispose of it in the nearest facilities available to us. Over the last three clean-up events (two in Durres and one at Berat Castle) we have collected over 150 rubbish bags, each bag having a capacity of 120 litres. We have conservatively estimated that this would equate to around 1.3 tonnes of rubbish. But this does not even scratch the surface.

Two weeks ago we cleaned up Berat. Splitting into three teams, one team took Gorica, one took Mangelem, and my team headed up to the castle. We were dismayed to find the banks around the bus parking area strewn with plastic bags, glass and plastic bottles, and plastic food packets. After spending one hour removing that waste, we decided to tackle the area by the castle. I walked up a rocky path, admiring the beautiful views that present themselves from the bottom of the bastions. But then I turned a corner and was utterly shocked at what I found.

Old computer keyboards, broken televisions, shelving units, clothing, building waste, household insulation, plastic, glass, shoes, and other items covered the entire area. I looked at the disheartened expressions on the faces of my team and I didn’t know whether to cry or lose my temper. This beautiful castle that has endured for centuries, that has defended itself against invaders from all corners of the continent and that has stood the test of time and inclement weather was now under siege from its own people. 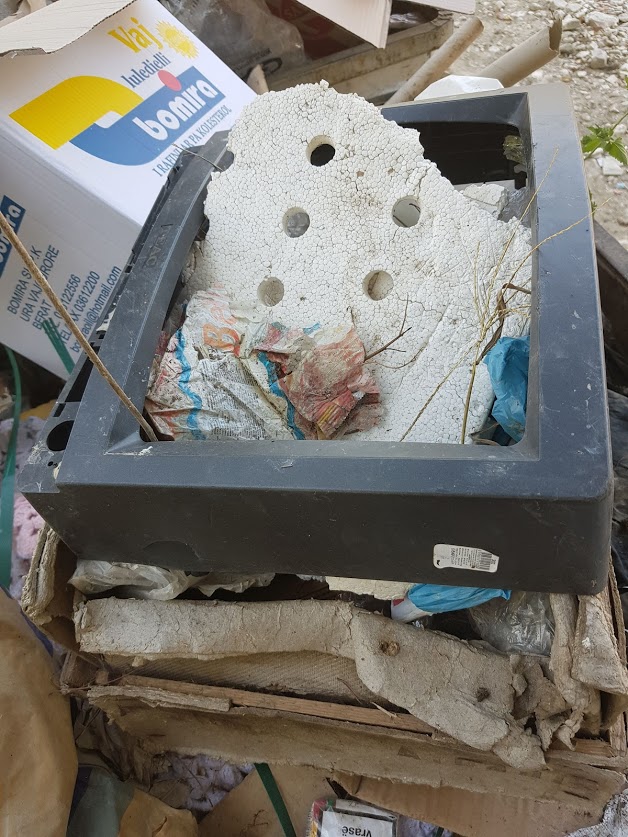 This was not just waste from passing tourists, nor was it just a couple of bags of everyday rubbish; this was evidence of the systematic dumping of building materials and household trash. In other words, people have been putting rubbish in their cars, driving up to the castle, unloading the bags from their car, walking up a rocky path and throwing it deliberately behind the castle.

I have to wonder what goes through these people’s minds when they do this. What do they think happens to the rubbish? Do they have any pride? The funny thing is the hypocrisy of it all; I imagine that these foul louts have immaculate houses with Albanian flags hanging on the wall, I also imagine that they are the first ones to shout about how much they love their country, and how proud they are to come from Berat. Yet, they do not think twice to desecrate the environment that they are so lucky to be blessed with.

I had the same thought in Durres when I was picking up my 1000th cigarette but from the sandy shores. As I looked at the lipstick-stained cigarette butt in my hand, I could not help but wonder, does the perpetrator of this crime simply stub out their cigarettes on their carpet at home? Do they dispose of it down the side of the sofa? Or flick it into the kitchen? I highly doubt it. What I cannot understand is why people can take such pride in their homes and claim to be patriotic, but yet, in reality, they do not give a damn about the world around them.

The concept of “home” does not just start and end with the four walls that surround us, it extends to every part of the environment that we inhabit. It includes the block we live in, the street we walk down, the city we wander around, and the beach we spend our weekends at. Albania is our home and within it, we have a duty to respect it and take care of it, not just for us, but generations to come. For a country full of people that are so proud to be Albanian and that beam with such pleasure when I describe this place as “beautiful and incredible”, it boggles my mind how they can go about their lives with such indifference.

Yes, there needs to be a proper recycling infrastructure in Albania, yes rubbish collection services need to be improved, and yes there need to be heftier fines and more enforcement for littering and fly-tipping, but these changes are unlikely to happen until the mentality changes. The government is not going to waste its time with something that it thinks no one cares about, and right now, to me at least it seems that very few care about the state of the environment.

In a country that is struggling with corruption, poverty, its economy, and a wide range of other social issues, I believe that your beautiful environment and its incredible diversity is the greatest gift that you have been given. Unfortunately, this gift is under threat and if steps are not taken by each individual to look after the environment, to protest against the desecration of heritage and natural spaces, then in a generation or two, most of it will be gone forever.

I have said this before and I will say it again; this world doesn’t belong to us, we are merely curators entrusted with caring for it on behalf of future generations and so far, we are doing an excellent job at letting them down.