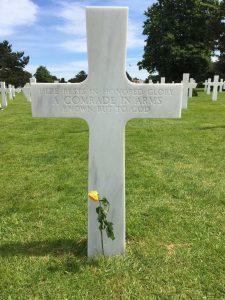 IF EVER PROOF WERE NEEDED THAT WE FOUGHT FOR A CAUSE AND NOT FOR CONQUEST, IT COULD BE FOUND IN THESE CEMETERIES. HERE WAS OUR ONLY CONQUEST: ALL WE ASKED…WAS ENOUGH…SOIL IN WHICH TO BURY OUR GALLANT DEAD.
General Mark W. Clark
Chairman, American Battle Monuments Commission, 1969-1984 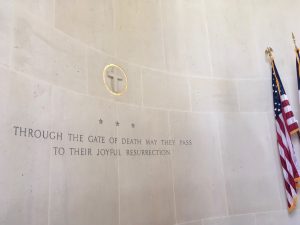 As you walk into the American Military Cemetery at Omaha Beach, the first thing you notice is the silence. Maybe the birds are chirping, the waves are crashing on the beach below, but that is all. The people, those walking around the graves, are silent. Their faces torn with emotion and respect…and something else…fear, fear of what these men had to face.

The visitor’s center is even more remarkable. There are a myriad of people there – young and old, black and white, male and female…French, Americans, Czech, Dutch, all of them stare at the memorials, and learn in a fearsome quiet, awed by the actions of the men who fought and died in this holy place. 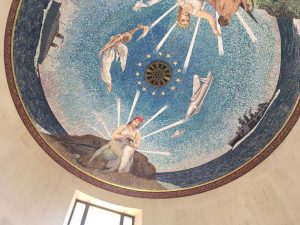 I was struck by the emotion of a young, black girl who stood in front of a portrait of a 21 year old soldier for probably 15 minutes, who gave everything for his friends, and for his country, and is buried at the American cemetery at Omaha Beach. I saw a young French woman cry at a video of the veterans who survived, explaining the psychological scars that they will carry with them to their grave.

The experience at Pointe du Hoc is the same. Here, where a few hundred Rangers scaled these cliffs under withering gunfire to save the day and begin the process of saving the free world, is another holy place. The ground literally yearns to tell its story of what happened there so long ago. The destroyed bunkers, the cratered landscape, scream out in pain, so that no one will ever have to experience this Hell again. 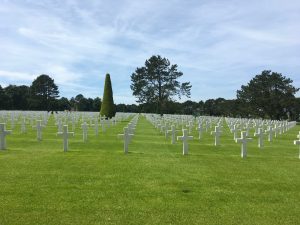 I think these memorials to the gallant American spirit should be mandatory for every American, once he or she turns 21, to visit. They will come away with a different view of America than what they were taught in their communist schools back home. Those who moan with their fake victimhood, have no idea what real hardship, or sacrifice, really is. After all, America used to be about sacrifice, not how much you could get from the government before the lights went out.

I really want the young, black school girl who screamed ‘fuck you’ in a twenty minute rant to her professor at Yale, in a video that went viral, to come here and experience what oppression really looks like.

Would she have the guts to face certain death for her country? I think not.

And one more thing, the men who save the world here during those frightful few months, were white. They were white males. Thank God! for toxic masculinity that could defeat the German war machine.

Yes, the ‘Boys of Pointe du Hoc’ could tell a thing or two to our SJWs, safe in their ‘diversity’ positions in our elite universities. It’s time we taught our children the real history of America. The history that saved the world, many times over. The history that put men on the Moon. The history that rebuilt Europe. That is the America I know, and the one I am teaching my children about.

Rest in peace my proud warriors. Your job is done.

Ours is just beginning. 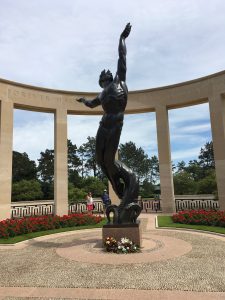 A Journey To Kosovo

Secret Albania- The Threat Of Looters On Albania’s Underwater Treasures