In a small town of Georgia, Saguramo, 30 km away from the Capital Tbilisi, lays an unusual memory of the Soviet Era –  The Center of Space Construction. The ground based design and test bench complex for large size and high precision engineering structures is a Soviet technological complex for building and testing large size space structures, built in 1989.

The once thriving Soviet complex looks different in 2017 – A giant, useless building, a rusty iron heap, forgotten by everyone, even by Saguramo’s dwellers.

I was surprised that I was not aware of the existence of such building, but organizers of 4GB – Georgian annual electronic music festival found it and made it revive. 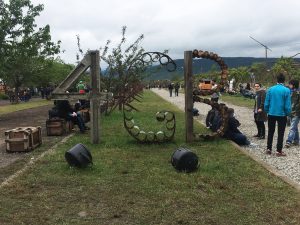 While enjoying the best beats of worldwide electronic music, I had the feeling that at the same time I was at a place full of mystery, history and Soviet aura. The 4GB concept this year was a great example of bringing together the future and the past on the stage. In spite of a great dance floor, where a few decades ago people were producing large size space structures, there were small rooms – absolutely similar to soviet design, and a huge yard, full of benches for the students. Rotten, rusty cars, gas masks, printing machines, turntables, old radios and TV boxes – I found myself believing, that time travelling is possible, I experienced it there.

Whether it be the Georgian public broadcaster pavilion, Georgian film pavilion, or the electric locomotives manufacture factory etc. – The festival has always been distinguished by its locations, but in its 7th year they took it to the whole new level.

What better purpose for an old Soviet technological complex than hosting an electronic music festival?

“That time Gio was one of the pioneer DJs, a prominent musician, he was studying in Austria and always loved to share the electronic sounds, he was carefully collecting over there. He could gather all the different social classes under one music – criminal minds, snobs, punks, lazy-bone friends, etc. Basically this could be the opening chapter of Georgian clubbing history. Gio made a great contribution to the scene..” – 4GB guys recall.

Gio’s sudden death in a car accident in 2010, left a large group of friends in absolute frustration, this is when the idea of 4GB was born, with the aim to keep Gio’s vibe alive…

Since the very first year of the festival, it has developing gradually. In 2011 4GB lasted 1 day for only 1000 invited guests; it was conducted in the “National Music Center of Tbilisi” and was headlined by Gio’s all time favorite – Michael Mayer. Since then Mayer’s been the closing act of all 7 4GBs, including this year… one of the most iconic figures of German electronic music, the founder of Kompakt, and huge influence of many generations, Michael Mayer is already a part of the 4GB family and it’s impossible to imagine a festival without his final touch…

This year, 7th 4GB was visited by around 30 000 people, lasted 4 days, and the great musicians came from all over the world:

Carl Craig (dancefloor experimentalist and top Detroit techno producer who has few equals in terms of the artistry, influence and variety of his tracks);

Marcel Fengler (quoted as “one of the finest techno DJs” (Resident Advisor), introducing his unique and “multi-faced personality” (Electronic Beats));

Shed Live, DJ Deep and many others.

“The most important charm of this festival is the environment that organizers make for us – amazing nature, tons of Soviet symbols, an enormous space full of beautiful and kind people, and of course great music. But I must remark, that this year comfort was on the highest level. In the near camping area, which was like heaven, there were little bars where kind elves were working. They were carrying out all your wishes; they were doing everything to make you happy. I, for example, wished porridge oats and they found it for me, I was completely shocked.” – says Ana Subeliani.

4GB festival is unique in the region and was recognized as the Best Event of the Year by Electronauts Music Awards in 2013, 2014 and 2015, but organizers always avoid journalists and interviews. There are only few articles about festival on the internet. I’m just lucky. As organizers say, they aren’t doing this for profit or any other personal interest, they’re just friends, who are making a party as a tribute for their friend.

4GB is a non-profit venture and all income goes to further development of the festival. Not only organizers, but even some acts play for free to make it bigger and cooler. This year approximately 400-500 tourists were assisting the festival, but next year organizers want to make it more international; it’s their future objective, but the location – Georgia – won’t change.

And, here, in independent Georgia, the attitude towards Soviet culture is gradually changing. The fact is that Soviet era symbols are becoming part of modern hipster style. Tbilisi witnesses more and more cafes, bars, art spaces, even hostels designed in a stylish Soviet form. Without any ideological judgement, the Tbilisi art scene is using the Soviet past to create an exotic and outstanding atmosphere, especially for tourists and the generation that never lived in the Soviet Era.

Today, 4GB An electronic music festival that brings together people from all over the world in a Soviet Center of Space Construction to create an exotic experience for them  –  could Stalin ever imagine that?