Why is it every time an Albanian football player of whatever team makes the sign of the two-headed eagle, the symbol of the Albanian flag, the Serbs go crazy? 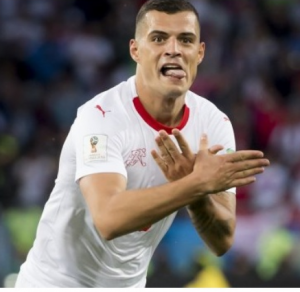 Granit Xhaka and Gjerdan Shaqiri, part of the Swiss national football team, scored two fantastic goals yesterday, in their great winning match against Serbia. Both Swiss players have Albanian origin. It has become a tradition now that if Albanian players score goals in whatever match, representing whatever team, they celebrate by crossing their hands to show the two-headed eagle, the symbol of their national flag. With this, they want to tell they are proud of their origin.

The world has become a global village. People live everywhere, not necessarily in their homeland. But most do not forget their origin, especially Kosovo-Albanians, who have been forced to immigrate to other European countries, to escape war in former Yugoslavia.

In a football match, we are used to seeing all kinds of celebrations; some take off their shirts or kiss the ring, others make the cross or dance.
But Xhaka-Shaqiri’s celebrations were immediately contested by Serbia. “FIFA should react immediately. This is called Provokacia 2”, wrote Serbian media, referring to the first provokacia during the Serbia-Albania match a couple of years ago, in which a drone with the Great Albania on a red flag flew over the stadium in Belgrade. 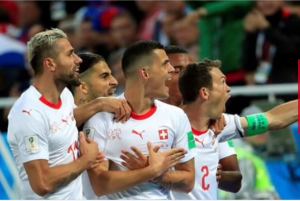 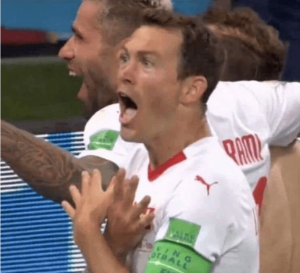 But why is yesterday’s celebration called a provocation? Should we stop footballers from celebrating even in other ways mentioned above, without offending anyone?

Many international media referred to yesterday’s match Serbia-Switzerland as historical and political. But football is popular entertainment, it has nothing to do with politics. It is time to divide these two. Serbia should not continue having the same stupid attitude towards Albanian symbols. They should know by now that they have lost Kosovo forever and look forward.

Asked about the gestures, the Swiss captain, Lichsteiner, said the players were under great pressure, as Serb fans had been provoking them for days. He stated the eagle is not a problem. He himself crossed his hands to form the eagle, to celebrate after the two goals. Even the Serb coach and captain, in their interviews, stated that politics should be left outside the stadium. This could be good advice for Serbian President Vucic, who is expected to lower such meaningless tensions, not stir more conflicts.

In a World Football Championship, everyone should speak and celebrate football.
.

Russia Sure Behaves Strangely For A Country Bent On Conquest