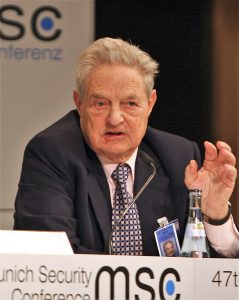 As President Trump takes on the globalist scourge that has savaged the America middle class, it is instructive to look at other areas of the world where the so-called “Soros prescription” is alive and well.

Mr. Trump tapped into a deep, rich vein of domestic angst over the open-border, internationalist vision championed by Hungarian-American liberal billionaire George Soros. Developing nations hungry for freedom, the rule of law, and the benefits of a market economy would do well to learn from the U.S. experience and not buy a bottle of Dr. Soros’ snake oil.

Having been kicked out of Hungary, Mr. Soros and his network of NGOs are still virulently active in Eastern and Central Europe. It is a poorly-held secret that Mr. Soros has been deeply entwined in Ukrainian politics since the 2014 Maidan Revolution. Allegedly hacked documents in 2015 showed Mr. Soros appointing himself “a self-appointed advocate of the new Ukraine,” and detailed the billionaire’s intricate involvement with the Obama State and Treasury Departments in the push for weapons and billions of dollars in assistance for the Poroshenko government.

Although the visa-free regime now set up with the European Union thrills the Ukrainian people, they should beware that the offer comes with strings. At the end of the day, the globalist medicine looks to strip a country of its natural resources for the use of international corporate interests and to open the borders to millions of illegal migrants, destroying a nation’s sovereignty, culture and security forever.

The moral: Beware what you wish for. Just ask the citizens of Sweden, Italy, Germany or France how they are enjoying the massive increases in crime and the massive headaches involved with assimilating a large Muslim population.

The Soros International Foundation “Vozrozhdenie, which injects millions each year into Ukraine to fund the billionaire’s agenda, has its proteges seeded throughout the halls of power in Kiev. The Soros power structure is very interested in Ukraine’s gas transit business, not to mention its agriculture, energy, health care and IT industries. With its abundance of natural resources and an educated work force, Ukraine is the perfect candidate to be “colonized” to serve the globalists’ agenda.

It seems the Sorosistas’ first choice to lead Ukraine, Petro Poroshenko, has been unable or unwilling to deal with the systemic corruption that paralyzes the state. He is likely going to lose the upcoming presidential election and the wolves are circling. Longtime rivals are lining up to compete against him.

Mr. Soros’ partner in Ukraine is Viktor Pinchuk, son-in-law of a former president and long-time friend of the Clintons and the Clinton Foundation. There are reports that Mr. Soros and Mr. Pinchuk have a new project — electing popular singer Svyatoslav Vakarchuk to the Ukrainian presidency. There is ample photographic evidence of the three hobnobbing in Davos in the recent past.

Mr. Vakarchuk holds a special place in Ukrainian culture, as his music and activism have been a voice for the popular pain and discontent given the failures of the Poroshenko government and the painful separatist conflict grinding away in the east. After an initial foray into politics, he resigned his seat in parliament in 2008 after one year due to corruption concerns.

Mr. Vakarchuk loves his country and no doubt wants to do what’s in its best interests. But with very little experience in business or politics, it won’t be easy for the singer to stand up to the Soros machine once installed by the Open Society crowd.

The Ukrainian people need to think long and hard about whom they want to lead the country. The Soros track record is not one any ambitious nation would want to emulate.