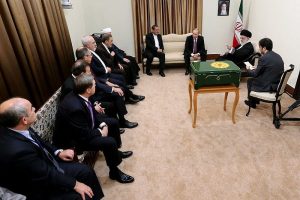 Image by Official Website of the supreme leader of Iran

On Wednesday, Russian news agency TASS quoted Russian Deputy Foreign Minister Sergei Ryabkov who called on all countries to do their utmost in order to preserve and implement the Iran nuclear deal. “We believe it as an irrevocable condition that the Joint Comprehensive Plan of Action (JCPOA) should be strengthened, preserved and that its functioning in its current form should be ensured in the future.”

Of course, Donald Trump is exactly right, the Iran nuclear “deal” is a horrible deal for America. Barack Hussein Obama “negotiated” that Iran get all the goodies up front and then put them on a path to get nuclear weapons to threaten the world in a few short years. Iran has been testing ballistic missiles in the mean time, which doesn’t technically violate the deal but surely breaks the agreement in spirit.

So, Iran gets money and nuclear weapons, what does Russia get out of the bargain? It gets weapons sales to the real Islamic State, the Islamic theocracy of Iran, lots of sales and lots of money.

So, of course, the Russian diplomatic corps is doing its best to keep the deal in place, so the goodies keep flowing to all.

All I can say is Thank God for Donald Trump! Someone who actually stands up for the national security of the country instead of selling it to the highest bidder. No, there won’t be any more plane loads of cash flowing to Tehran in the middle of the night so the mullahs can distribute it to their militias and terror armies around the world.

Iran and Russia are already bragging to Israel that their client-state, Syria, already has the highly capable, Russian-produced, S-300 anti-aircraft missile system to threaten the Jewish state. If the Iran deal continues, expect the weapons sales to continue, a bonanza for the Kremlin and Tehran, and a nightmare for Israel and American aircraft operating in the region.

Europe is on board because it wants to make a lot of money from the Iranian’s new-found riches, damn the consequences.

It’s time the White House end this charade and protect the American people, as Donald Trump’s instincts tell him to do.