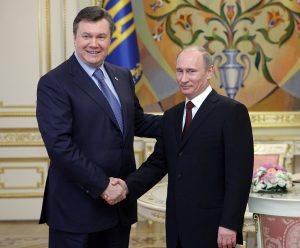 Ukraine is obviously a very unstable place. Corruption there is still ubiquitous. Car bombings are becoming frequent again. War simmers in the East. Strongmen control the strings of power. Criminal Investigations and stings, legitimate and corrupt, escalate in all directions.

Ukraine has even impacted the United States in a major way as the Mueller investigation rumbles on, indicting Paul Manafort for money laundering stemming from his consulting work for the Yanukovych government over the prior decade. At the same time, in Washington Ukrainian politicians and expediters scramble to establish contacts with our State Department and political opinion leaders, tripping over each other and occasionally sparking controversies like the recent fake “congressional hearing” on Ukraine’s National Bank organized by unwitting American lobbyists duped by East European “consultants” that hired them.

Perhaps the most fascinating aspect of Ukraine’s continued political and economic death spiral is the continued impact of the former regime – the Yanukovych presidency. The regime stole billions from the Ukrainian people, money which is now safely ensconced in offshore financial jurisdictions, untouchable without a long legal fight, or maybe not at all. The Ukrainian government is, of course, trying to recover the assets. However, a more interesting development is the use by the Yanukovych gang, exiled to Moscow, of criminal elements inside Ukraine to buy up strategic assets to further Moscow’s interests and stoke instability in Kyiv.

In recent months, a Russian ( and now Ukrainian) businessman by the name of Pavel or Pavlo Fuks has raised his profile provoking interest from Western media and renewed investigations by the law enforcement establishment of numerous countries, including the USA. One such recent law enforcement inquiry reads in part, and I’m paraphrasing, Mr. Fuks is aligning himself with criminal figures in Ukraine and laundering Yanukovych assets into the country. The inquiry also states there are multiple criminal investigations opened on Mr. Fuks.

This development is interesting because Pavel Fuks has been accused by many in Ukrainian media of buying up strategic assets for Yanukovych and his cohorts hiding out in Russia, and controlled by Russian government. Obozrevatel, a Russian language publication, writes, “Ukraine is the main area of Fuks‘ business. His task is to use the money of the Russian criminal circles to buy out promising Ukrainian gas and oil fields, energy companies, and other tactical assets for his Russian friends.” It appears that Pavel Fuks established a safety net for himself in Ukraine after leaving Moscow, and recently received numerous gas licenses in Ukraine, launched a public relations campaign in Ukraine and US, and had gotten all of the criminal investigations and charges against his companies and himself “erased”. During former New York Mayor Rudy Giuliani’s recent visit to Ukraine’s city of Kharkiv, Pavel Fuks even managed to snap a photo with the famous American Mayor.

Mr. Fuks, born in the city of Kharkiv, was involved in the initial financing and development of the notorious “Moscow City” construction project in the Russian capital, attaining the position of Chairman of the Board of Directors of MosCityGroup. To finance the planned mega development, Mr. Fuks allegedly borrowing money from Russian criminal syndicates. However, after the financial crisis of 2008, the project floundered and Fuks could not handle the debt service, prompting him to flee to Ukraine where he reemerged as a low-level shill for the fugitive Yanukovych cabinet. Perhaps Russian influencers allowed him to flee and prosper in Ukraine because of his usefulness inside Ukraine for them or their FSB handlers.

Russia is comfortable with an unstable Ukraine, and would love to acquire certain financial and energy properties, to ensure the Kremlin can keep it that way. According to sources, Mr. Fuks is persona non-grata in Moscow but is useful in Kyiv. It seems the Ukrainian government believes Yanukovych is using crooked businessmen as proxies to buy up businesses in Ukraine, where thugs and criminals can run off to Ukraine and find a business swampland they feel comfortable in. There they can reinvent themselves and thrive because it is easier to make pay offs, delete criminal investigations, and operate in a state of business and political chaos, where scams are easier to conceal.

As Ukraine descends into yet another morass of corruption, with another wave of Ukrainian politicians getting charged with graft, Kyiv is availing Russia of an opportunity to achieve its geopolitical goals. Ukraine is becoming a nation plagued by looming anarchy where criminal element reigns, which is the exact goal of the Kremlin.

We have been provided a list of alleged criminal cases that Mr. Fuks has paid others to make “go away” inside Ukraine. This raises the question of who inside the Ukraine law enforcement and judiciary establishment is getting paid for these ‘favors’? Is the Ukrainian government complicit? As U.S. and European authorities look into Mr. Fuks‘ recent spate of financial activities, his business career in Russia tells a story of meteoric rise as a Moscow developer funded by nefarious interests and the Russian government, and subsequent collapse predicated on unpaid loans, breached agreements, unfinished projects, allegations of diverted funds, and sustained criminal affiliation.

Nevertheless, Mr. Fuks travels the world as he buys up Ukrainian enterprises on behalf of his Moscow based handlers. He visits US on a regular basis. In the recent several years he visited Florida, Washington and New York; he has a residences in Florida.

In a clever public relations move, Pavel Fuks is controlling and raising money for a fund to build a monument to the Jews killed by the Nazi regime at Babi Yar in Ukraine. Apparently, the goal is to raise $100 million. Mr. Fuks “penned” an Opinion Editorial this August in The Hill promoting his philanthropic endeavor. With this man’s track record in managing money for construction and infrastructure projects, and his history of working with notorious criminal “investors,” why on Earth would Ukraine allow this to happen?

The Hi-Tech Traditionalist: Super Bowl 51 Was A True American Celebration

The Hi-Tech Traditionalist: The Righteous Psychology Of Meaningful Sacrifice And Its Perversion By Our Neo-Bolshevik Globalist Elites