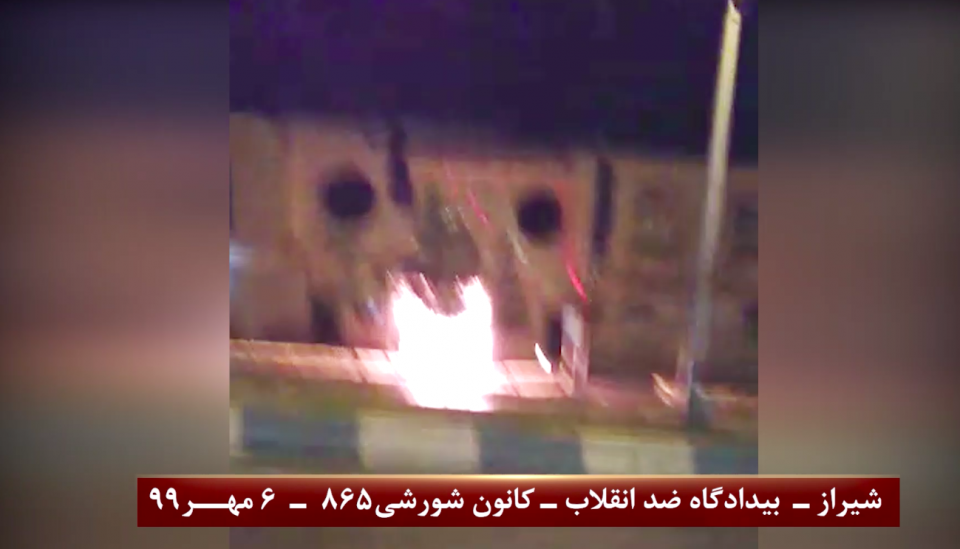 The courthouse in Shiraz, Iran which sentenced Iranian champion wrestler Navid Afkari to death, was firebombed yesterday, in response to his execution by the regime. A video of the incident was provided by the Iranian Resistance and is embedded below.

A statement was released by the National Council of Resistance in Iran.

In the early hours of Sunday, September 27, 2020, in protest against the criminal execution of Navid Afkari, the Iranian national wrestling champion, the defiant youth targeted the court in Shiraz, which issued his death sentence and set fire to its entrance.

The execution of Navid Afkari, arrested for participating in the 2018 uprising, led to a wave of international and domestic condemnation. In the past two weeks, defiant youth in various cities, including in Shiraz, Navid’s hometown, wrote graffiti and distributed leaflets condemning Afkari’s execution and the execution sentences for other detained protesters. They wrote, “fire is the answer to execution.” The people of Shiraz welcomed the targeting of the regime’s court in Shiraz, which took place while the regime’s repressive forces were on maximum alert.

Secretariat of the National Council of Resistance of Iran (NCRI)

Confusion Over Alleged Turkish Shoot Down Of Armenian Attack Jet

Iran: Fear Has Spread To All Levels Of The Regime