A map on August 11 of clashes since July

Kurdish groups in Iran have been increasing their activities over the summer months of 2018. An uptick in clashes, particularly with the IRGC, has been documented from published reports by the Iranian regime as well as the groups.

What Comes Next For Syria? Interview With Former US Ambassador To Syria Robert S. Ford

The recent clashes are part of a larger context that includes more activity by the PDKI over the last two years, as well as pressure on Tehran from sanctions and protests. On August 11 PJAK, which is linked to the PKK, released a detailed statement urging cooperation among the Kurdish groups. This includes a ten part strategy. Portions indicate that there should be a joint committee, forming a “national force”, and representing all groups under an “umbrella of the National Democratic Council.” Joint media and representation to international forums would form a part of the agenda as well as creating a kind of center in Europe and “acenter to organize various types of joint activities and conferences, including sit-ins and demonstrations of the Kurdistan society in eastern Kurdistan [Iran].” It would also deal with special sections for women’s rights issues and political prisoners. 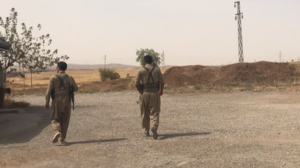 The three Iranian groups have shown they can inflict numerous casualties in the major clashes they have had, such as when members of PJAK attacked an Iranian base in the village of Dari near the city of Marivan, killing 11 members of the Iranian Basij militia on July 21. PDKI said they killed 27 members of the IRGC in June.

The map of incidents show more PDKI activity in the north up to around 50km from the border. Many clashes have happened on the border or near border crossings or roads that lead to the border. These are areas of tensions for a variety of reason. The Iranian regime has been accused of killing local Kurdish kolbars or men who carry goods over the mountain, usually accused of smuggling. In addition oil is transported from Kirkuk via Suleimaniyeh into Iran. One truck exploded killing a dozen people in Sanandaj in July, resulting in riots against the Iranian security forces.

Tehran has responded to the clashes with a variety of tactics, including targeted assassinations, according to the Kurdish groups, and artillery bombardment of camps on the border, as well as detaining activists. The PAK, for instance, says two of their members were detained. A member of a human rights group called Iqbal Murandi was killed in July in Iraq. In March a PDKI member was killed near Rania in Iraq. PAK members have also said they were targeted over the last six months.