In mid-June the Syrian regime and its Russian allies as well as Iranian-backed militias launched a major offensive to defeat the Syrian rebels in southern Syria. This was where the Syrian rebellion had broken out in 2011 in Dara’a when protesters were suppressed by the regime during the Arab Spring. Since then there had been an active and important part of the Syrian rebellion. They had held on through 2015 when a de-confliction zone was set up and there was a ceasefire from 2017 to June 2018. The ceasefire ended after the regime had already defeated rebels in Damascus and also other areas of Syria. It was the last purely Syrian rebel area as well. Northern Syria had come under a Turkish umbrella or under observation points in Idlib. Eastern Syria had become part of a US-led Coalition and SDF sphere of influence.

Once the US had given signals it would not intervene, and after the Trump administration had wrapped up support for the rebels in the south via Jordan, the writing was on the wall. No one would save them. The regime offensive was not harshly opposed, instead the rebels retreated and 300,000 IDPs fled. Eventually they handed over the border with Jordan and gave up ground.

I had covered the Golan for years and covered the Syrian regime offensive almost every day since it began. I interviewed the Syrian rebels and in 2015 I looked at the lynching of Syrian rebels who were brought for medical care into Israel. In June 2017 I discussed the situation with local residents. I investigated a chemical weapons attack near Beit Jann in November 2017, wrote about the myths and misconceptions and the ISIS threat in December 2017. I slept on the Golan after Iranian agents launched a barrage of missiles in May 2018.

Recently I covered the offensive while speaking with those helping the IDPs, with international actors such as the WHO and also monitoring the US, Jordan, Iran, Russian and Iranian aspects.

In mid-June, the Syrian regime and its allies, including Shi’ite militias aligned with Iran, began concentrating forces in southern Syria. The rebels hold a U-shaped area in southern Syria. One side runs along the Golan Heights and the other stretches north from the Jordanian border. At the bottom of the “U” is Dara’a, a city next to the Jordanian border that the regime and the rebels have contested since the start of the rebellion in 2011.

Nawa, one of the largest towns held by the FSA near the Golan was hit by numerous Syrian Air Force and Russian air strikes, according to local activists who posted photos of plumes of smoke. The town is only a dozen kilometers from Israel’s side of the Golan and the community of Keshet on the Golan Heights. Air strikes also targeted ISIS fighters near the Golan in a small enclave the group has controlled for several years.

“It is still early… and there is a sense that the Jordanians may pressure the rebels into negotiations,” says Tamimi. In other places in Syria the regime has signed reconciliation deals with local rebels and left them to run their own affairs even after the government reasserted control. This “soft” deal could be in store for the small rebel groups on Israel’s border. 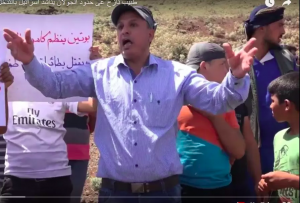 In the video a dozen men and children held signs and called for help from Israel and the US, saying they had been abandoned by the world. One of the signs requested that the UN forces return to their bases near the demilitarized zone between Israeli forces and Syria. Up to 60,000 civilians have fled fighting in southern Syria in the last week as the Syrian regime, backed by Russian airpower, has launched a major offensive. Thousands arrived at the border with Israel over the last 48 hours. The IDF delivered 300 tents and tons of food and humanitarian supplies for children on Thursday night. 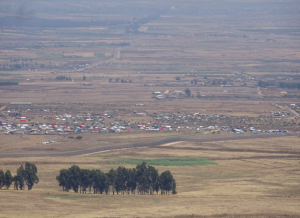 I visited the Golan and photographed the IDPs

On Saturday the tents, buses and shacks of the refugees could be seen for several kilometers stretching from the Syrian village of Al Rafeed towards Al-Malgah in the southern Golan, around 20 kilometers south of Majdal Shams.

Some of the tents appeared to be new and orange, while others looked dusty and may have been near the border for longer.

Syrian rebel-held towns and villages accepted government rule on Saturday, after intense bombardment this week that the UN said caused 160,000 people to flee, including to the Israeli and Jordanian borders.

Neither country is willing to accept the refugees as insurgent lines collapse in parts of the southwest as the result of a Syrian regime offensive against rebel forces, backed by Russian air power that began in mid-June.

July 2 How will Netanyahu act amid Syria crises

Netanyahu, in power since 2009, has presided over Israel’s reactions to the Arab Spring. The Syrian civil war became the longest lasting conflict resulting from the protests of 2011 that swept Arab regimes in Egypt, Libya and Tunisia from power. Israel was concerned about the chaos unfolding. Only Assad held onto power. He did so with Iranian and Russian support.

For Israel, the main threat in Syria in the last several years has been Iran’s penetration of the country, including the construction of permanent military bases and training of thousands of Shi’ite militiamen. To confront the Iranian threat and weapons transfers to Iran, Israel has waged a shadow war that has been reported in the foreign press. In August 2017, Israel Air Force commander Maj.-Gen. Amir Eshel said Israel had carried out 100 air strikes over five years in Syria.

The offensive, backed by Russian planes, is now within 10 km. of Israeli forces on the Golan border and risks opening a new front between Islamic State and the Syrian army. In addition, if the regime cuts the road from Nawa south the rebels and the civilians in the area near the Golan will be cut off from any aid they had been receiving from near Jordan. This will make them increasingly reliant on Israel for humanitarian aid, increasing chances of a crisis. The Syrian regime and its Russian allies likely know this and they are waging the current battle accordingly.

On Wednesday, the Syrian rebels said they walked away from negotiations with Russia about a ceasefire. The rebels said they had come to discuss a cease fire but found themselves presented with “humiliating” terms, including that they hand over their weapons and stop fighting. The rebels in southern Syria met the Russian delegation in an undisclosed town in southern Syria somewhere near Dara’a.

However, for Israel, the deal may not bring peace. The full details of the agreement are unclear but it does not appear to include the areas of Syrian rebel control adjacent to the Golan Heights. It also does not include the area of Islamic State control near the Golan. That means that Israel’s security interests are not part of the deal. In fact, Iran’s Press TV state media has celebrated the deal claiming it will now undermine Israel’s “collaboration” with the “militants” next to Quneitra and its control of the Golan.

July 11 Fate of Tanf base in question

The coalition base at Tanf, located in the desolate Syrian Desert near the borders of Iraq, Syria and Jordan, has served as a training camp for anti-ISIS Syrian rebel fighters since 2016. But the garrison’s status is now murky after Assad’s regime, backed by Russian airpower, launched a major offensive in southern Syria.

Images posted online show the base’s relatively small size. But its area of influence is much larger, including a surrounding 55 km. “deconfliction” zone in which regime forces, Iranian- backed militias and other groups are prohibited from entering. Rumors online now posit that when US President Donald Trump and Russian President Vladimir Putin meet in Helsinki later this week they will discuss the fate of the Tanf base. 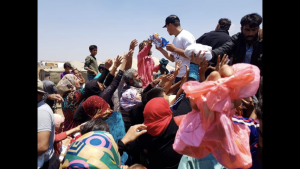 “No one knows where it’s going,” said Dalton Thomas, founder and president of FAI Relief, as he checks on the tens of thousands of internally displaced Syrians seeking shelter alongside Israel’s Golan Heights border fence. People struggle to eat and sleep, and get their heads around the idea that this is the end,” Nic Walsh said. For them the “end” means the conclusion of the Syrian civil war that erupted in 2011 in Deraa in which more than 500,000 people have died. Now the regime, backed by Russia’s air force and Iranian-supported militias, is closing in on the rebels’ remaining pockets.

“Jasim and Nawa are getting squeezed, so a lot of people are filtering elsewhere,” said Dalton Thomas, founder of the American evangelical group FAI Relief that has been working with Syrians displaced by the fighting who have sought shelter near the Golan border fence. The crisis of hundreds of thousands of internally displaced people in southern Syria is worsening, he warned.

On Friday the World Health Organization called for the protection of health facilities and increased access to southern Syria.

According to the WHO, 210,000 people have been displaced by the fighting near Deraa and Quneitra.

July 15 WHO statement on crises in the Golan

The WHO released a statement of concern and discussing access to t IDPs in Quneitra. I reached out to the WHO. I received a statement from Tarik Jasarevic, WHO Spokesperson. “The situation remains unstable in southwest Syria due to the escalation of hostilities. The area witnessed a large-scale displacement which raises serious concerns about the situation of internally displaced people (IDPs) who are without appropriate shelter and adequate health assistance. The increased fighting in Dar’a and Quneitra left 234,500 people displaced across southwest Syria and around 160,000 people in Quneitra. Reports said that cutting off food supplies made IDPs struggling to feed themselves as skipping and reducing food meals become a nutritional method adopted by adults to ensure that their children get food which will negatively affect their health.”

A source close to the Syrian rebels said that Syrians in the northern Idlib province heard missiles fly over their locations on Sunday before explosions occurred near Aleppo’s Nayrab Airport in the evening.

“It is a strong message to Iran,” a man familiar with the situation told the The Jerusalem Post. “Iran must get out entirely from Syria, not only keep away from the border [with Israel].” The source said that many Iranian-backed militias had been harmed in the Sunday air strike. These included militias from Iraq who were based at the location.

Trump Gets Russia To Agree To Restrain Iran In Syria