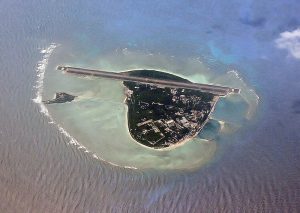 The Chinese militarization of the South China Sea has been happening for some time. Since the weak Obama administration wouldn’t stand up to any dictator, the Chinese, along with other adversaries, probably just said “Why not?” and proceeded with their malignant behavior in creating the ability to block traffic in one of the world’s busiest sea lanes.

Anti-ship missile batteries, anti-aircraft defense systems, fighter jets and bombers have all been sighted on the atolls in the region that China has claimed and fortified.

Beijing-based naval expert Li Jie declared the Chinese may have removed them for maintenance purposes, or simply hidden them inside buildings, only to be redeployed again later, wrote SCMP.

“With the increasingly tense relations between the two countries, it’s understandable that we make a little gesture of compromise,” said Li.

“It’s not wise for China to directly confront the U.S. We shall decide later [on possible redeployment] after the tensions go down.

“It’s better that we make three steps forward and two steps back, because both sides are still restrained and neither side wants to go to war,” wrote SCMP, quoting Ni Lexiong, a naval expert with Shanghai University of Political Science and Law.

U.S. Defense Secretary James Mattis made it very clear recently that the U.S. military will challenge China’s attempted dominance of the waterway.
The Chinese action could be a nod to President Trump, who recently signed a deal with Chinese telecom company ZTE, extracting fines and monitoring in a face-saving measure for both sides.

The art of the deal truly is at work in the Pacific and everything is related, from North Korea, to China, to Russia, to Japan to the South China Sea.