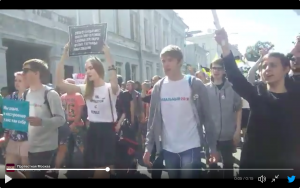 The Kremlin is facing an increasingly unruly younger generation as hundreds of young people protested in Moscow over the weekend over new stringent internet laws and the detention of individuals based on their internet presence. While the Kremlin has had success cracking down on a free, traditional press in Russia, to prevent anti-government information from spreading, social media has been much harder to corral.

Kremlin opposition leader and anti-corruption activist Alexei Navalny has made particularly good use of social media, especially Youtube and has a channel with over one million followers. His video detailing alleged corruption of Russian Prime Minister Dmitry Medvedev was seen millions of times and sparked large protests in cities across Russia.

Opposition party PARNAS, which was among the organizers, said 3,000 demonstrators attended the rally, titled “For a Free Internet.” The Internal Ministry said 800 people protested, reported The Moscow Times. Protesters held signs reading “Free speech everywhere and always,” “Truth is stronger than censorship,” and “Down with the police state.”

The protest below shows demonstrators shouting, “Sokolovsky is not a terrorist!” a Youtube blogger who went to jail for playing Pokemon Go in a Russian Orthodox Church.