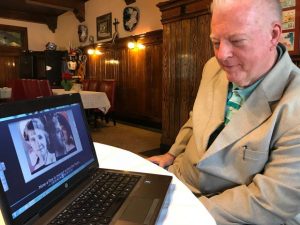 ALBANY — Eugenia Smith died in her 90s in 1997 in a Newport, R.I., home filled with valuable Russian artifacts that served as reminders of Smith’s claim to be the last czar’s youngest daughter, Grand Duchess Anastasia. She is interred in the cemetery of a Russian Orthodox Monastery in Jordanville, 80 miles west of Albany.

Experts have refuted the claims of Smith – whose given name was Eugenia Drabek Smetisko — and consider her one of several Anastasia impostors. But a local art dealer and author, John “Johannes” Froebel-Parker, has compiled compelling evidence during a decades-long obsession with the enduring Anastasia enigma. He has gone to great lengths, including enlisting a facial recognition expert, to prove that Smith was the real Anastasia and not simply another in a long line of debunked claimants.

The former owner of the Froebel Gallery on Lark Street in Albany lays out his matroyshka doll narrative and its nest of circumstantial evidence in a new book, “Anastasia Again: The Hidden Secret of The Romanovs” (Ice Box Media), available on Amazon. It’s unlikely to convince any skeptics, but a frequent Amazon reviewer, who goes by the handle Master of the Universe, read the 424-page book in two days and pronounced it “completely plausible.”
Everything about Anastasia, youngest daughter of Tsar Nicholas II of the ruling Romanov family at the time of the Russian Revolution, is shrouded in mystery and intrigue. Persistent rumors of 17-year-old Anastasia’s possible yet improbable survival after her family’s execution by Bolshevik secret police on July 17, 1918, in Yekaterinburg continue to enthrall…