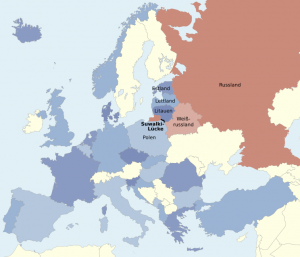 Russian behavior in the Baltic region and in Eastern Europe may be pushing the Nordic holdouts of Sweden and Finland to seriously consider joining the North Atlantic Treaty Organization. Countries in the region have complained of aggressive Russian military aircraft maneuvers, submarines in Swedish waters, and the massive militarization of the Russian exclave on Kaliningrad, situated amongst the Baltic nations.

Latvian Foreign Minister Edgars Rinkevics (Unity) declared recently Sweden and Finland would have his country’s support if they chose to join the alliance. “This is a decision they themselves must make. The worst thing we can do is try to influence this discussion,” reported The Baltic Times.

NATO is extremely worried about defending the Suwalki Gap, a valley through which Russian forces could pour through in a conflict and cut the Baltics off from Central European members of the mutual defense pact. The United States and other NATO countries have begun recently to permanently station rotating groups of armored brigades in Poland and the Baltics for this region.

The Baltic region has also faced an onslaught of ‘hybrid warfare’ with disinformation campaigns and propaganda running rampant from Russian security services. A recent study found that two out of three social media interactions about the NATO presence in the Baltics came from Russia-originated bot accounts.

According to an Inizio survey, 43 percent of Swedish residents support the country joining NATO, 37 percent are against, while 20 percent do not have a point of view on this matter. This is the highest support for NATO membership in Sweden the past 10 years, added the Baltic Times.