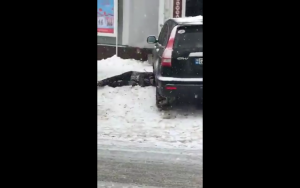 An explosion in a commercial shop in the Moldovan capital of Chisinau today killed two people.

“Chisinau police inform that a few minutes ago, there was an explosion in a grocery store on Alexei Matejevic Street in Chisinau, as a result of which two people were killed. Police have arrived at the scene,” the police press service said.

“Moldova’s chief police officer Alexandru Pinzari said an explosive device detonated after a man entered the shop at 11 am (0900 GMT), took 10 packets of cigarettes from the shop, and refused to pay for them. As he was leaving, an explosive device fell out of his rucksack and went off. The blast killed him and a man who was on the street outside the shop. Both died immediately,” reported Associated Press.