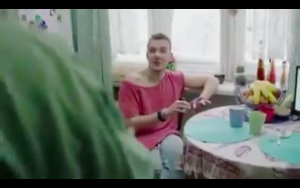 Interesting videos have been popping up in Russia to get people to the polls for the 2018 presidential election. Below is one of the more in-depth productions showing the consequences someone believes could happen if you don’t vote. Russian President Vladimir Putin wants a high turnout to legitimize his election for a fourth term.

In the video, his character initially plans to skip the March 18 presidential election, but he changes his mind after having a nightmare that shows him the horrible consequences of not going to the polling station: he’s drafted into the army, despite being 52 (and one of the soldiers who delivers the summons is black, for some reason); his son, wearing a red Communist Pioneer neckerchief, asks him for 4 million rubles (almost $18,000) to donate to his school for security guards; and in the kitchen we find an “adopted gay,” writes Meduza.