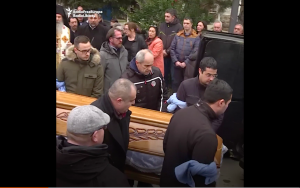 “Thousands of people in Kosovo’s northern city of Mitrovica paid their respects on January 17 to Oliver Ivanovic, an ethnic Serb political leader in Kosovo who was shot dead a day earlier outside his Mitrovica office. Carrying flowers, mourners lined the streets on the northern side of Mitrovica to escort the coffin with Ivanovic’s remains as it was taken away to Serbia’s capital, Belgrade, for his burial on January 18,” reports RFERL.

Photos: In Donetsk, More Than 120 Thousand People Came To Farewell To Zakharchenko