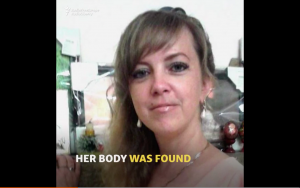 The National Police office of the Kyiv region says activist attorney Iryna Nozdrovska died of multiple stab wounds in what was described as a “violent death.”

The statement on January 3 came two days after Nozdrovska’s body was found floating in a river in Kyiv’s Vyshhorod district.

“There were stab wounds on the body, on her neck, and on her chin…It was a violent death,” said Nikolai Zhukovich of the police press service.