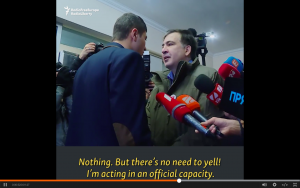 Former governor of Odessa, Mikheil Saakashvili, arrived at the Ukrainian Prosecutor General’s office in Ukraine after being summoned for questioning over recent charges being filed. Saakashvili is charged with colluding with Ukrainian businessmen with ties to Russia to topple President Petro Poroshenko.

In the video below, Misha is seen getting into a verbal altercation with an investigator.