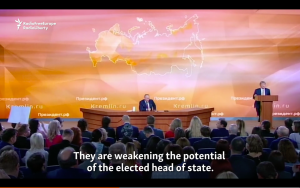 Russian President Vladimir Putin said today in his annual question and answer session with the Russian people that the collusion allegations against Russia and the Trump campaign were baseless. The press conference lasted four hours and touched a range of subjects. Putin pointed out evidence which suggests the Russian state is headed for improvement, influence, and prosperity.

Reporters also brought up touchy subjects like the war in Donbass, Syria, and the annexation of the Crimean peninsula by Russia in 2014 against the wishes of the Ukrainian state.