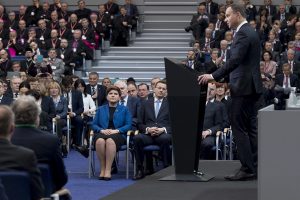 Poland’s new prime minister, Mateusz Morawiecki, said today he is expecting the European Union to issue a hammer blow against the Eastern European country by initiating ‘Article 7’ procedures to force them to accept migrants, stop judicial reforms, and halt alleged assaults on the media. The procedure could see Poland lose its voting rights in the bloc. However, that outcome is doubtful as it would require a unanimous vote. The other members of the Visegrad Group, especially Hungary and the Czech Republic, would most likely veto the measure if pressed.

“If a process has started and, as far as I understand, the decision has already been made that next Wednesday the European Commission plans to start (the procedure), then it will most likely be triggered,” he told reporters, wrote Reuters.

“From the start of such an unfair procedure for us, until it ends, we will certainly talk to our partners.”

An additional thorn in the relationship between the EU and Poland regards Warsaw’s logging of the Bialowieza forest, which Poland regards as necessary to protect the forest from fire and other hazards. European environmentalists are against the harvesting.