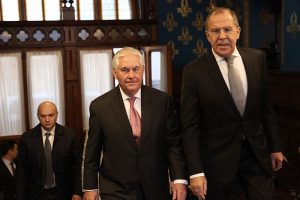 U.S. Secretary of State Rex Tillerson will meet Russian Foreign Minister Sergei Lavrov next week in Vienna on the sidelines of an OSCE event. The conflict in Syria, and the simmering war in the Donbass region of East Ukraine will be on the agenda.

“There is a meeting that’s been scheduled with Foreign Minister Lavrov,” said a State Department official, speaking on condition of anonymity. The discussion will most likely take place on December 7, reported RFERL.

“We have a fairly robust set of discussions under way with the Russians on a lot of global issues — [North Korea], Ukraine, and certainly Syria,” the official said.

Ukraine “will very much be on the agenda” during the OSCE talks the official continued.

“The OSCE plays a role in Ukraine, particularly with the Special Monitoring Mission…The secretary really has a heart for…the safety and security of the Ukrainian people in the east in the occupied territories who continue to be the target of military operations with the encouragement and participation of forces from the Russian Federation.”