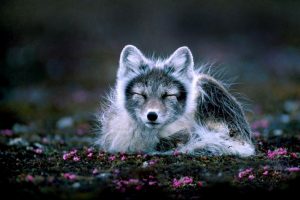 These superb photographs were captured by the scientist right at the end of his sojourn studying the Arctic nature.

As he put it, the fox’s show in the Yamal morning glory was ‘a perfect end to my season on the Yamal peninsula’.

Alexander Yakovlev explained: ‘The whole world appears to be pink during sunrise.

‘This was the end of October, and winter has taken over the extreme north-east of the Yamal peninsula.

‘A low tundra sun rises above the horizon for several minutes – to reveal a pink Arctic Fox.