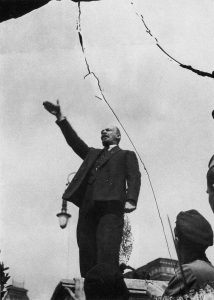 Russia’s Communist Party Gennady Zyuganov warned on Monday that finally burying the body of Vladimir Lenin, the Soviet provocateur of the Bolshevik Revolution, will cause mass unrest and riots in the streets of Moscow. Lenin’s embalmed body has been on display since he died early in the twentieth century and I housed in a mausoleum in Red Square. As a side note, the name ‘Red Square’ has nothing to do with communism but refers to the color of the stones used by Italian designers of the Kremlin.

“All the chatter about reburial has no grounds other than an attempt to pit generations against each other on Red Square and organize riots,” the state-run RIA Novosti news agency cited Zyuganov as telling reporters, reported The Moscow Times.

He also attacked reports that Lenin was a German plant sent to help Germany win WWI. The narrative states Russia was within months of winning the war before Lenin was sent back to Moscow from Germany in a sealed railway car to start the Bolshevik Revolution.

“People who do this are digging a hole for modern Russia, people who don’t respect the heroism of their fathers and grandfathers deserve no understanding or basic respect,” the Interfax news agency cited him as saying.

The Russian public seems to be split on the issue with younger generations favoring burial, but older former Soviet citizens refusing to do so.

G7 To Discuss Standing Up To Russian Aggression

New Calls In Poland To Extradite Roman Polanski To US