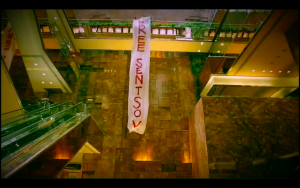 Oleg Sentsov is serving a 20-year sentence on charges of masterminding terrorist attacks in the Crimean peninsula annexed by Russia in 2014. The August 2015 ruling was met with criticism from rights groups and filmmakers worldwide, wrote The Moscow Times.

“We slightly occupied Trump Tower,” the group wrote on Twitter on Monday. “We came to occupy Trump Tower to call attention to political prisoners.”

The group also mentioned Alexander Kolchenko, as one among “hundreds of political prisoners behind bars waiting for your support.”

“Because they, like you, did not sit by — they were fighting for their freedom in Crimea.”

The band gained notoriety when two of their members were imprisoned by Russian President Vladimir Putin for two years for singing a protest song in a church in defiance of the Russian Orthodox Church. The two members were pardoned before the Sochi Olympics.