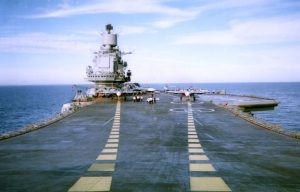 Russia’s only aircraft carrier, the aging Admiral Kuznetsov, is in big trouble.

Russia & America: The Art Of Winning & Losing Against All Odds

This week, a Russian-language report in Interfax disclosed that Russia has cut in half funding for repairing and modernization its aircraft carrier. “Instead of [the] previously planned approximately 50 billion rubles [$867 million] for the work, it is planned to allocate about half of the previously announced amount,” Interfax reported, citing a source “familiar” with the situation…