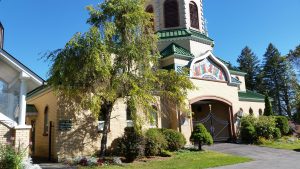 (Interviewer’s note: the fascinating history of the founding of this seminary and monastery by clerics of the Russian Orthodox Church, born for the most part in Tsarist Russia leaving for the USA after the onset of Bolshevism, can be found at: http://www.synod.com/synod/enghistory/enhis_htm.html)

Thank you Father for taking time on this lovely fall Sunday afternoon to speak with me a bit about the current topic of relations between the Russian Orthodox Church Outside of Russia and other Christian denominations. To begin, how would you characterize the place of the Orthodox Church in the wide spectrum of “Christianity?”

Basically we come from the viewpoint of our being the One True Church, from the time of the Apostles, which Christ founded. So our Russian Orthodox Church is one of various national churches which belong to this Church.

Historically, the Orthodox Church has been divided administratively along national lines with the local and national churches being part of the one Orthodox Church. These national church affiliations can be changed over time as nations dissolve or appear. These various national churches in Orthodoxy come together from time to time when needed to form a Council to work out problems which might arise. Otherwise the Orthodox churches show unity by concelebrating, visiting each other, etc. As far as churches which are not part of the Orthodox Church, the Russian Orthodox Church as a whole, depending on the situation and denomination as there are so many differences in Christianity, tries to live in peace and be a witness to what we believe to be the truth. We will engage in discussions and dialogue to see if there is any possibility of shedding light to the truth of Orthodoxy. We also collaborate on issues such as social issues which are common to both, such as abortion albeit Right to Life, etc. We do not seek to “reconcile differences” with other denominations as the only reconciliation would be to return to Orthodoxy.

This leads to my next question, and that is the state of affairs with the Roman Catholic Church.

Some people have the feeling that the Roman Church considers the Eastern Church as equal, calling us a “Sister Church” or even the quote “Two Lungs in the Same Body,” however officially, the Roman Church still considers itself to be the True Church which has the True Fullness in it and that all other churches are lacking in something. This is not acceptable to the Orthodox Church, because the Orthodox Church believes itself to be the True Church which has not changed since the inception of the Church. We regard that all those who consider themselves “Christians” but who are outside The Church, have in some way erred or have erroneous teachings outside of Orthodoxy.

Specifically, could you please address the issues which place the Roman Catholic denomination outside of Orthodoxy.

The first reason which caused the separation was the teaching of the “filioque clause” in the Nicene Creed which the Church had established in the 4th century stating that the Holy Spirit proceeds from the Father through the Son, while the Catholics and other western Churches say that the Holy Spirit proceeds from both. This was a response to the Arian heresy in the West which taught that there was no Holy Trinity and that Jesus was born a man who eventually became godlike. The Arian heresy started basically in Spain where the Visigoths had accepted it and where it was being countered by the Catholics. In their zeal, the Catholic fathers “went overboard” trying to honor Christ saying that the Holy Spirit emanated from Christ too, eventually becoming accepted by Rome. Charlemagne of the Franks also accepted it, whereby the Catholic Church tried to exert its supremacy over the whole church by demanding that all Christians accept the filoque (note: Latin for “and the son). Some earlier popes rejected the filioque just as there were earlier popes who also said that no bishop could be prelate of the whole church. In the early Church when there were divisions or differences of opinions, the fathers would ask the pope of Rome for a word of wisdom and sometimes defer to him. Rome was not the only Church, as Peter had also established a Church at Antioch, one of the ancient patriarchates. There were differences of opinion, and sometimes the popes of Rome were in error. One early example is of the conciliarity (note: the adherence of the Church to the authority of a council or synod) of the Church’s NOT being under one bishop, another the question decided in Jerusalem in the first century about Jewish kosher albeit dietary requirements and whether they applied to gentile Christians. The Bishop of Jerusalem was then Apostle James, and there were many different opinions about this matter. The other apostles asked James who was heading the council and not Peter, thereby illustrating that Peter was not the instrument of conciliarity but rather the councils were. The position in Rome was one of honor because it was the capital of the Empire, but eventually, when the Eastern Roman Empire was established with its center in Constantinople, it was thought to be en par or even have precedence.

This caused controversy, so this illustrates the Primacy of the Pope in Rome was not an early Christian thought. The Roman Church teaches that dogmas and theology can be developed over time, but the Orthodox belief is that councils define dogmas, but not that they were not understood before, just that they were being clarified. The Holy Trinity appeared as codified dogma in the first century, but Christians had already believed it before the first ecumenical council in Nicaea. Basically, one can say that the Orthodox Church held councils to codify dogmas so that previous beliefs would be clarified. However, the Roman Catholic Church has rather new dogmas, revealed over time, such as the Immaculate Conception of Mary. There were saints in the Roman Catholic Church who taught against that belief. Bernard of Clairvaux a post schism saint said that the teaching of Mary’s Immaculate Conception actually detracted from her greatness as though she could not sin. The Orthodox Church believes that the Virgin Mary was born according to natural means with a human nature. The Orthodox teaching, the middle road or the “Holy Path,” believes that Adam fell from an innocent state in which he had been living, but not that God had removed a special grace from him. In conclusion, the points of contention which caused the Great Schism were the filioque and the infallibility of the pope who sent a Bulla (a papal declaration) to Constantinople where it was thrown on the altar table in the Hagia Sophia with the demand that the Eastern Church accept his primacy over the whole church.

There was still hope that there would be reconciliation, and there were attempts at unity. However, during the Crusades troops were even sent to Constantinople where relics were stolen and brought back to Rome. There was an attempt in Florence in the 15th century when Constantinople had almost been decimated by the Ottomans. Saint Mark of Ephesus was the only Eastern Bishop who would not sign the Document of Union there. The Metropolitan of Moscow, a Greek, actually agreed with that union. When he returned to Moscow, Grand Duke Basil of Moscow inquired of the Metropolitan before the Liturgy how the gathering in Florence had progressed.. In the Liturgy the bishop commemorated the pope. The Duke sent him away from Moscow with the order never to come back again.