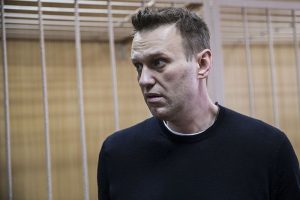 Russian opposition leader and anti-corruption crusader, Alexei Navalny, was detained outside his home in Russia prior to attending a rally in central Russia. He posted a video on Instagram of police arriving to arrest him, shown below.

“Oh, how old man Putin doesn’t want me to make it to the demonstration,” Navalny wrote, reported The Moscow Times.

Police did not authorize the rally in Nizhny Novgorod, saying it was illegal as another rally had been already planned that day.

Navalny told his followers after the detention, “What’s the difference whether I’m there or not?” he wrote. “Come to the rally in the name of principle and as a sign of protest against the stupidity and degradation that are ruling our country.”

He vows to run for president next year against Putin, even though he has a felony embezzlement conviction which many say was politically motivated, to keep him from running.

Navalny has repeatedly exposed corruption within the Russian leadership and has been attacked physically multiple times.

ISIS Releases Image Of Bomb That Brought Down Russian Plane