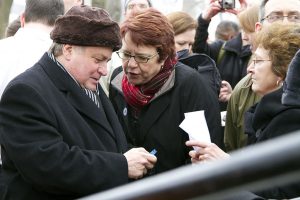 During a speech at the Metropolitan Republican Club in Manhattan to highlight his new book, “Rogue Spooks: The Intelligence War on Donald Trump,” political operative and commentator Dick Morris outlined the Deep State’s attempt to unseat duly elected President Donald Trump from power and the strategy Trump seems to be using to combat Obama operatives in our intelligence agencies.

According to Morris, upon gaining office in 2008, President Obama began a secret process to “weaponize” our intelligence capability in a bid to maintain power for the Left and weaken the Right’s hold on the American intelligence and defense establishment. Hundreds of personnel in the intelligence and military fields were fired in order to clear the way for Obama loyalists to implement the new agenda of using the military industrial complex to stay in power and promote a Marxist agenda rather than fight our enemies.

To the Deep State, Trump is seen as a disruptive figure who could end the power and privilege of those who shape American policy from a shadowy vantage point behind the scenes. Therefore the Deep State decided, upon being surprised by Trump’s election, to remove the irritant. Since none of the broadsides the Left used during the election worked, Trump’s enemies finally decided on a strategy of using a complete falsehood against him—collaboration with the Russians. Their goal was to employ mass disinformation and create such uncertainty among the American public that a special prosecutor would be empaneled. It worked.

The outcome we see today was created by Obama using illegal surveillance and unmasking against Trump campaign figures to plant ‘time bombs’ which went off once the Trump team was put in place, further eroding public perception. Hence the clearly planned accusations against Mike Flynn, Jeff Sessions, et cetera.

These disinformation and subterfuge techniques were honed by our intelligence services during the Cold War removing communist governments around the third world. According to Morris, Obama simply decided to use them against an American president. Morris also made the case that the techniques were also used against Kennedy, as well as Nixon.

However, there is a strategy which seems to be working for Trump as he fights the Obama Deep State—it’s called competence. Trump’s policies are working, quickly, to heal the economy and make America great again. According to Morris, a president with a 60% approval rating, simply cannot be impeached. There would be violence in the streets. He used this strategy effectively while working for Clinton during his impeachment proceedings.

Morris sees Trump’s recent statements on DACA and other explosive issues, as a way to increase the overall approval rating among Americans. Morris offered some advice on DACA—let them stay but don’t allow them to become citizens and bring in millions of chain migrants.

The speech was insightful and well received by the audience.