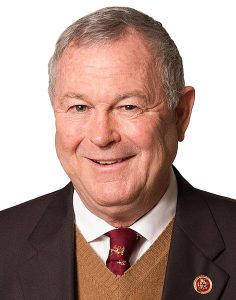 Congressman Dana Rohrabacher of Orange County, California said Tuesday in an interview with Tsarizm on Capital Hill that on a recent trip to visit internet leaker Julian Assange, who is holed up in the Ecuadorian embassy in London, he was provided information which would shed light on the Hillary Clinton email scandal, and possibly who leaked the information during the 2016 election. The problem is the Congressman intimated he had attempted to provide the information to President Trump but had been refused an audience so far; he has not released publicly the information he received. Rohrabacher chairs the House Foreign Affairs Subcommittee on Europe, Eurasia and Emerging Threats.

“I’ve been trying to get the information to the president for the last two weeks,” said Congressman Rohrabacher to Tsarizm.

Congressman Rohrabacher has been active in pushing the U.S. foreign policy establishment to move towards a more positive working relationship with the Russian Federation. “Why do we have this vicious hatred towards Russia?” the Congressman asked. “They are no longer communist with an ideology of domination. They are nationalist and want what’s best for their country. We should work with them where we can, like in combatting Islamic terror.”

Recently, Rohrabacher’s Deputy Chief of Staff, Paul Behrends, was removed in his position as staff director for the House Foreign Affairs subcommittee due to alleged Russian contacts.

“Paul Behrends has done a terrific job for me and the committee,” Rohrabacher said in a recent statement. “I have not heard anything to the contrary. I am looking forward to discussing this with the committee leadership. I am sure we will work this out.”

The new White House Chief of Staff, General John Kelly, has been accused of preventing long-term Trump supporters from getting an audience with the president, requiring every request for presidential contact to go through him. Many conservative analysts feel Trump is intentionally being prevented from hearing anti-globalist opinions.

The mainstream media has promoted the narrative that is was Russia who hacked Hillary Clinton’s emails and provided them to Assange. This has been the backbone of a movement to delegitimize the Trump presidency by the Left and the willing media.

If if was not Russia who provided the data, shouldn’t the American people be allowed to hear the information, and make a judgement for themselves?