Poland, bearing the brunt of legal action initiated by the European Commission over its judicial reforms, which moves selection of judges from an outside panel to the executive branch and the legislature, as well as pressure over its refusal to admit migrants per EU directive, is striking back at the EU empire by demanding war reparations of up to $1 trillion be paid to Poland for crimes committed against it by Germany during the Second World War.

“We should sit down to serious talks with the Germans and together think about how to deal with the issue” of reparations, Polish Foreign Minister Witold Waszczykowski told the local commercial RMF radio station, reported AFP.

“How can we deal with the fact that Germany’s 1939 attack (on Poland) and unresolved post-war issues still cast a shadow on Polish-German relations?”

“The fact is that Poland was destroyed during the war, terrible crimes were committed here, and we have received no compensation for that.” Waszczykowski said that Poland is preparing its list of demands for Germany. Polish Interior Minister Mariusz Blaszczak said over the weekend the number could be as high as $1 trillion. 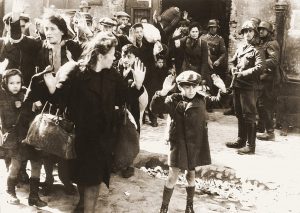 Jaroslaw Kaczynski, the head of the Law and Justice party (PiS) has said the communist government in Poland’s abdication of war reparations against Germany was done at the point of a gun by the Soviet Union and is not valid. He accuses Germany of avoiding its responsibility for the war while amassing great wealth ever since.

Six million Poles were killed during the war by the Nazis and the capital Warsaw was razed to the ground.

Poland, Hungary, and the Czech Republic are all facing legal action by the European Union over migrant and rule of law issues.