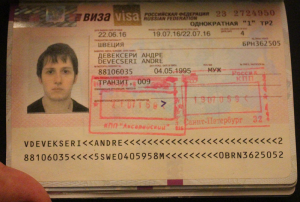 The U.S. State Department announced today it will cease issuing non-immigrant visas in Russia on August 23rd due to a cutback in staff ordered by the Russian government in retaliation for former President Obama’s sanctions against Russian diplomatic personel in the U.S. Russia ordered almost 800 diplomats and staff to leave Russia earlier in July. The Moscow embassy only will start to process non-immigrant visas on September 1st of this year.

“Due to the Russian government-imposed cap on U.S. diplomatic personnel in Russia, all non-immigrant visa operations across Russia will be suspended on Aug. 23,” the U.S. Embassy said in a statement published Monday morning, reported Russia state news agency TASS.

“Operations will resume in Moscow on Sept. 1; visa operations at the U.S. consulates will remain suspended indefinitely…Beginning September 1, nonimmigrant visa interviews will be conducted only at the US Embassy in Moscow…NIV interviews at the US Consulates in St. Petersburg, Yekaterinburg, and Vladivostok are suspended until further notice…As of 0900 Moscow time Monday, August 21, the US Mission will begin canceling current nonimmigrant visa appointments countrywide. The NIV applicants who have their interviews canceled should call the number below to reschedule their interview at the US Embassy in Moscow for a later date…Restrictions for issuing US nonimmigrant visas will remain as long as diplomatic mission personnel cuts are in effect, the embassy stressed:
“We will operate at reduced capacity for as long as our staffing levels are reduced.”

The issue is a sensitive one for the Russian government as Russian citizens since the fall of the Soviet Union have grown quite used to traveling to the United States, and other Western destinations. However, the slow down in the Russian economy has forced many Russians to cancel this luxury.

Belarus Opens Visa-Free Regime For Citizens Of 80 Countries
First Deputy Chairman of Russia’s Federation Council (upper house) Defense and Security Committee Franz Klintsevich was voiced his displeasure at the action, “I would describe the American decision on suspending nonimmigrant visa issuance in Russia as a dirty trick, which is definitely out of tune with the status of the United States as a great power. It is clear that they hope to whip up dissatisfaction among a certain segment of the Russian population against the moves by the country’s leadership to roll back the number of employees at the US diplomatic mission in Russia…This will not work. People realize that the issue at hand is a tit-for-tat measure. They also realize that the suspension of visa issuance operations is not caused by purely technical reasons and that the American diplomatic mission’s staff members have all the means to fully do so in spite of the staff cuts.”

Russia Foreign Minister Lavrov had similar comments, “The first impression is the US authors of these decisions have plotted another attempt at stirring up resentment among Russian citizens regarding decisions by the Russian authorities…As for our countermoves…, I’ve already said that it is necessary to study in detail the decisions announced by the Americans today,” he stressed. “I can only say that we will not take it out on US citizens, that is, if someone hoped that in that case one fool makes many, they were mistaken.”

Amid Escalating Violence In Turkey, Erdogan Says Putin Ready To Give Up On Assad