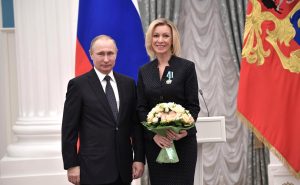 The Russian Foreign Ministry pushed back against American inferences that reduced U.S. diplomatic staff in Moscow would cause a reduction in the amount of visas offered Russian citizens to travel to the United States.

“Any links between reduction of personnel and visa issuance do not stand up to criticism as no one has ever expelled the Americans, no one has ever dictated or ordered them who is to go home and who is to stay,” Russian Foreign Ministry spokesman Maria Zarakova wrote on her Facebook account, reported Russian state news agency TASS.

“Hence, if Washington decides to reduce the number of personnel dealing with visa matters, it would be Washington’s sovereign, deliberate decision, not a forced decision by far. People should understand that.”

“Immediately after Russia said it was imposing response measures on US diplomats and property, the Americans began to threaten Russian citizens with problems and delays in issuing US visas,”

“Leaks from Washington explained that the reduction of US diplomatic personnel would adversely impact travel plans of Russian nationals.”

“And it is important for the public rhetoric on visa-related matters they have unleashed,” she stressed. “And if now they are telling us that personnel reduction would impact visa issuance procedures, it would be logical to announce exact or approximate figures and do it officially.”

Travel abroad is a right that millions of Russian relish and enjoy since the fall of the Soviet Union. It does not seem likely the Kremlin can put this genie back in the bottle. After banning Western cheese and other products, a reduction in travel permits could cause the Russian government problems with its elite.

Many Russian citizens have students studying abroad and have established businesses or investments that are critical to their lifesyle. The blowback for a reduction in visa permits could be significant and obviously why the U.S. State Department made the comments.