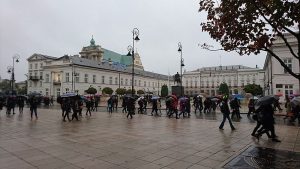 Demonstrations raged across multiple cities in Poland as the opposition protested against recent legislation approved by the Polish parliament that many see as reducing judicial independence in the Eastern European country. The European Union has also voiced its displeasure at the new bill which should be signed into law shortly.

The changes require the Polish parliament to submit judges for nomination which is the same process as in the United States.

“The noisy crowd in Warsaw was chanting “we will defend democracy” and against ruling party leader, Jaroslaw Kaczynski, who is Poland’s most powerful politician,” reported Associated Press.

There have been a strong of protests across the country during almost the entire reign of the Law and Justice Party as many see the democratic process under siege. Restrictions on abortion, NGOs, migrants, and other topics have all sparked social unrest by opposition forces. Many of these groups are most likely funded by George Soros to promote his ‘progressive’ agenda. Eastern Europe has pushed back against the Soros platform of open borders and destruction of culture.