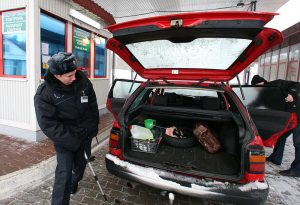 Russia may install temporary border crossing checkpoints with Belarus. Since the two nations are the only two members of The Union State, set up after the fall of the Soviet Union, border crossings have been mostly nonexistent. However, during a recent financial dispute over payment of oil contracts, crossings were reinstalled.

“The Russian government has discussed establishment of temporary border checkpoints along the borders with Belarus both along the highway and the railroad,” he said, noting that there will be no need for halts of passenger trains, wrote Russian state news agency TASS.

“We will be working rather hard starting from May 2018. We are, of course, concerned about our open border regarding the decree signed in Belarus that provides the right of visa-free entry for five days for citizens from 80 states,” Gorovoy said in response to a question on preparation for the 2018 FIFA World Cup.

Drug trafficking through the Russian-Belarusian border has grown significantly, the deputy minister said. “Drug trafficking has increased many times both through trains and the highway across the Smolensk Region,” Gorovoy noted, adding that it was necessary to unify the migration legislation and transfer to a single migration card by March 2018, wrote TASS.