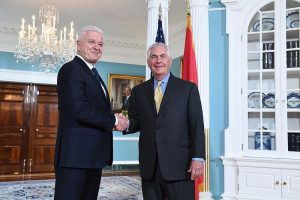 The Montenegrin Prime Minister, Dusko Markovic, reacted in parliament to the ban of a senior Montenegrin ruling party official, Miodrag Vukovic, from transiting Russia on the way to Belarus, calling the detention of the official ‘destructive and primitive.’

Vukovic was detained at Domodedovo International Airport in Moscow while transiting the terminal, changing planes on the way to Belarus. The action was taken, in the view of Montenegro, because the Balkan nation had joined the EU sanctions against Russia for its actions in Ukraine.

“Such attitude against a country which wants to self-determine its future is disappointing,” Markovic said. “I have never registered such a level of destruction, primitivism. It reflects the character of that (Russian) regime.”

“We will certainly not falter on our (pro-Western) commitment,” he added, reported Associated Press.

A spokeswoman for the Russian embassy in Montenegro, Yelizaveta Borisova, told the Russian TASS news agency that any attempts by Montenegrin media to draw a list of “undesirable” Montenegrin citizens “holds no ground,” reported AP.

Montenegro also blames Russia for a recent attempted coup in-country before the decision was made to join the NATO alliance.