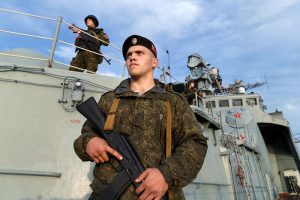 A Russian warship and submarine have fired four cruise missiles from the Mediterranean at Islamic State targets near the Syrian city of Palmyra, the Defense Ministry said on Wednesday.

The strike, which Russian news agencies said was the first of its kind since November, was carried out by the frigate “Admiral Essen” and the submarine “Krasnodar,” and targeted militants and equipment in an area east of Palmyra…