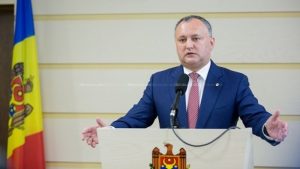 The tiny former Soviet republic of Moldova expelled five Russian diplomats today as tensions between Chisinau and Moscow heat up quickly. The last few years have seen high drama unfold in the relationship between the two nations.

Last year the Moldova people rose up against the theft of 20% of the Moldovan treasury in a diabolical bank fraud scheme. Moldovan authorities accuse the Russian security services of stealing the money to bring down the pro-EU government in Moldova. Moscow of course denies these accusations.

Moldovan authorities have complained of aggression and harassment while traveling from Russian authorities. The pro-Russian president, Igor Dodon is powerless to stop the pro-EU government and Prime Minister from continuing to confront Moscow on a variety of issues. Dodon was said to be furious today when Moldova expelled the Russian officials.

“This was done most likely on orders from the West,” Dodon said. “This crude decision will not be left unanswered,” he declared on Facebook, reported The Moscow Times.

“[This decision] is a provocation and a blow to those forces in Moldova led by President Igor Dodon, who are really calling for the normalization of bilateral relationship with Russia,” said Russian Deputy Foreign Minister Grigory Karasin, who added Russia would ‘prepare a tough response.’