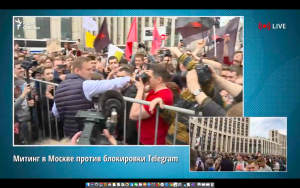 The Telegram chickens are coming home to roost in Moscow. The disastrous rollout of attempts to block the popular, Russian-developed, encrypted communications app have backfired spectacularly. Thousands poured out into Moscow streets today to protest and demonstrate for ‘internet freedom’. The younger generations of Russians has grown up with technology and they are loath to lose free access to the World Wide Web.

The event was put together by the Russian Libertarian Party. Many flew paper airplanes as a symbol of support for Telegram, whose avatar is an image of a paper airplane design.

Right now in central Moscow: Several thousand rally for internet freedom. Cries of "Putin is a thief" and "Russia will be free!" pic.twitter.com/8xWypYGeR6

“Over 10,000 people have gathered at the demonstration on Prospekt Sakharova, according to the crowd-counting service White Counter. Gatherers brought paper planes, a logo of the app, of various sizes and placards bearing slogans against censorship. “Off with Roskomnadzor,” party chairman Sergei Boiko said at the start of the meeting, referring to the state regulator that had blacklisted more than 14 million IP addresses in an effort to block Telegram,” reported The Moscow Times.

Opposition leader Alexei Navalny was also present at the protest and intermingled with the crowd which showed its support.

Here is a live broadcast of the event…