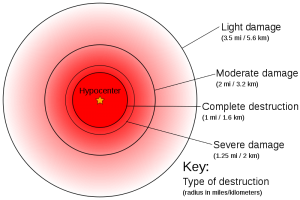 Image by King of Hearts

A member of the Russian parliament, while speaking at a security conference in Slovakia, declared that Russia would use nuclear weapons if NATO entered East Ukraine or the Crimean Peninsula. The comments seem to highlight Russian concern over the encroachment of NATO on its western borders and the inclusion of multiple former, Soviet republics, or satellites into the NATO alliance.

“On the issue of NATO expansion on our borders, at some point I heard from the Russian military — and I think they are right — If U.S. forces, NATO forces, are, were, in the Crimea, in eastern Ukraine, Russia is undefendable militarily in case of conflict without using nuclear weapons in the early stage of the conflict,” Russian parliamentarian Vyacheslav Alekseyevich Nikonov told attendees at the GLOBSEC 2017 forum in Bratislava, Slovakia, reported DefenseOne.

Montenegro was recently included in NATO club after a process where Russian allies in the country tried to prevent such an occurrence.

DefenseOne writes, While the Soviet Union maintained a policy against the first use of nukes, Putin’s government turned away from that strict prohibition in 2000 with the signing of a new military doctrine that allows for the limited use of nuclear weapons “in response to large-scale aggression utilizing conventional weapons in situations critical to the national security of the Russian Federation.”

“For us, [NATO] is a military alliance spanning three-quarters of the global defense money, now planning to expand that figure,” said Nikonov.

Russian President Vladimir Putin has stated multiple times to the global press when discussing opposing Russian actions in Ukraine, Syria, and elsewhere, “Don’t for get that Russia is a nuclear power.”

Looks Like EU Sanctions On Russia To Be Extended