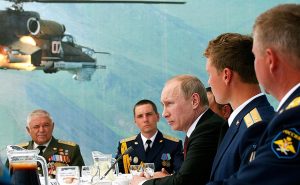 Terrorist snipers in Syria, are using sophisticated night vision equipment that have built-in Russian electronics. Kommersant.ru claims with reference to experts who have studied weapons of the fighters.

“We found so called electronic optical converters, produced in Russia”, – implied the source of publication. However, how they got into the war zone is unknown.

According to Russian legislation, the export of such devices outside Russia is prohibited.

One possibility is equipment could be transported from “third” countries, to which the night-vision devices, or their components, are delivered officially from Russia. Before export, a pre-investigation check is conducted.

The attention of Russian specialists to the snipers’ rifles, used by terrorists in CAP, is caused by the fact that fire from these rifles killed at least 4 Russians, who were soldiers fighting in Syrian territory.

It is thought that it was a sniper in November of 2015 who killed Russian marine Alexander Pozynich. In March of last year, sniper fire wounded Alexander Prokhorenko, and in February of this year a contract employee, Ivan Slyshkin, was killed. In the last few days, a Russian military adviser to the Syrian army, Lieutenant Colonel Alexey Buchelnikov, died from a sniper shot.

According to the Ministry of Defence of the Russian Federation, since September, 2015 in Syria, about 30 Russian servicemen have died. However Reuters reported the official statistics are underestimated four times. The Russian department denies this information.

According to reports, in Syria not only Russian weapons are used. Earlier it was reported that fighters use ammunition manufactured in Western countries, particularly Germany, the USA, and Bulgaria – writes Kommersant.

In 2013 there was a media boom as the list of Russian weapons which were requested by Syrian government troops emerged. Kalashnikovs, machine guns such as “KORD”, “PKS,” the “PK”, “Whirlwind” submachine guns, RPG, sniper rifles and shells were mentioned in the document. Also the Syrian military ordered anti-sniper detectors, night vision goggles, and night vision sights for sniper rifles.